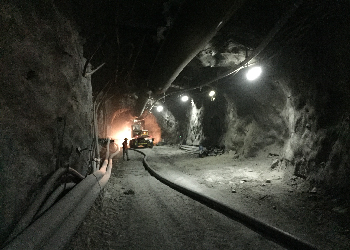 Underground mining is known to be a challenging activity given the working conditions created by actually being underground. In addition, mining activities of this kind require certain resources such as water and compressed air that need to be conveyed through service piping lines to the underground, thus generating added challenges to the operation.


First of all, installing a service line that can reach the deepest levels of the mine is already a challenge, especially when using traditional steel or HDPE piping.

On one side, these types of pipes come in limited length per section (usually between 6 and 12 meters), and require long installation times that can even reach several days depending on the requirements of the specific case. Moreover, given the heavy nature of traditional piping, installation usually requires more workers, tools, and installation equipment such as welding machines or special flanges which results in higher costs. On the other side, when installing traditional piping, workers need to be very careful when handling the pipes in rough terrain like those found within a mine. Sharp rocks and other minerals present in the terrain can have a negative impact on the pipes, especially when they are dragged to the required positions. Even if they are moved by using cranes or similar equipment, they can be exposed to damage from any of the elements present in the mine.

While it is true that HDPE piping provides a higher resistance to impact and abrasion than other traditional piping materials, it still requires many connections since it is not flexible enough to bend sharply, and it usually comes in short lengths. Many connections in a service line usually increase the possibility of leakage which means the need for maintenance is higher.

Fortunately for the mining industry, efforts have been made to develop better solutions for service line applications, with PE-X piping being a very successful one.

PE-X piping resistance to rough operational conditions as described above (and depending on the type of fluid) can reach 3x to 6x the resistance of steel or HDPE piping, based on laboratory tests.

Furthermore, given the increased flexibility, PE-X pipes can be found in long coils reaching up to 600 meters long. This allows to reduce the number of connections in the service line which means a lower possibility of leaks, especially with working with fluids like compressed air. Also, PE-X pipes can be found in larger diameters, reaching up to 710 mm in diameter. This is great for service lines operating with fluids that may carry sediments that could block the flow like water extracted from the underground mine.

Service water and dewatering applications can be challenging in underground mines. Pressure surges due to water hammer can cause burst pipes resulting in water shortages halting operations, and failure can be costly to repair.

Here, PE-X piping plays a critical role since it has inherit flexibility and high strain resistance, which makes it resistant to failure due to water hammer (x2.5 times the nominal pressure) while still being a lightweight pipe. Moreover, PE-X pipes can withstand high amounts of axial and radial stresses. They only stretch up to 2% of their length, and are capable of holding their own weight plus the water column, making it possible to maintain a more stable control of column pressure to avoid the costly damage from water surges and water shortages mentioned before.

Finally, the biggest advantage of PE-X pipes in underground mining operations is it´s tensile strength, that allows to install the pipes through shafts or robbins instead of the regular, ramps and tunnels. This reduces the quantity of pipe required, reduces installation time, allows for fewer connections and reduces manpower requirements. Even though steel pipes can also be installed through shaffs or robbins, they require steel cables to hold the weight of the pipes, and a require welding, resulting in a more complicated installation. 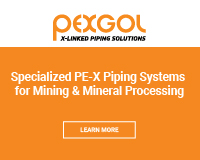