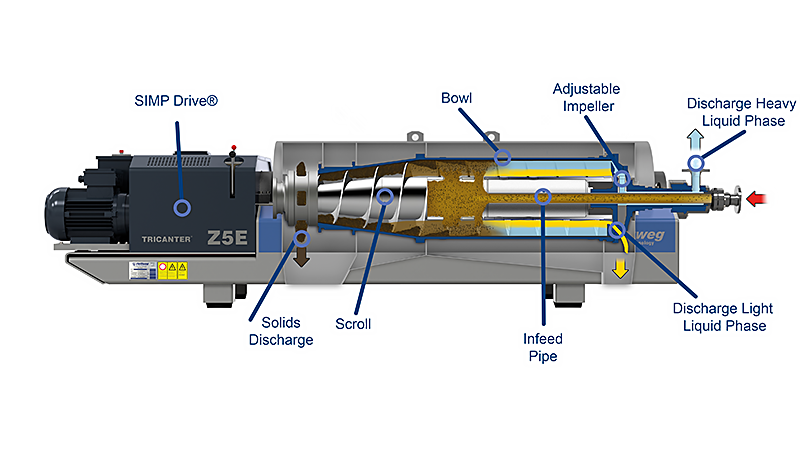 Solvent extraction (SX) is a proven and attractive method of extracting a precious metal element embedded in mined ores.
Even proven processes can have ongoing complications.
The Flottweg Tricanter®
can aid in resolving one of the costliest of those complications within an SX circuit:
loss of organic that becomes entrained within CRUD.

Mined ores require processing; many historical (or the ancient) processes involved subjecting the ore to high temperatures. Early examples suggested laying material in a fire until precious material melted away from the ore. They are known as pyrometallurgy – a process that utilizes heat to separate.  Later chemistry advancements encouraged hydrometallurgy – a process that employs a chemical agent to dissolve the mineral to extract it from the surrounding ore.  Hydrometallurgy is the guiding principle behind solvent extraction (SX). Downstream of the SX process, the precious metal is freed from its dissolved state, using the effect of electrowinning.

Many commercial SX plants suffer from the formation of CRUD.  CRUD is a solid-stabilized emulsion that most commonly accumulates at the aqueous/organic interface in the settlers of solvent-extraction processes.

CRUD formation is caused by various substances entering the SX circuit that comingle with a naturally occurring emulsified aqueous/organic layer.  The substances range from wind-blown dust, entrained fines from leaching, impurities in plant solutions, and even insects attracted by area lighting.  While a thin layer of CRUD at the aqueous/organic interface can aid phase separation.  Excess CRUD can interfere with phase separation and severely reduce the efficiency of the settlers.

Excessive CRUD build-up, in extreme examples, can allow the material to move into the next mixing stage, causing significant downstream process complications.

A common practice within effectively managed SX operations is to remove accumulating CRUD by skimming the material from the settler.  The skimming operation is not an exacting operation that often picks up some amount of aqueous from below the CRUD and some organic from above the CRUD.  The extracted CRUD is accumulated for further processing.

Reprocessing the skimmed CRUD to recover the entrained organic material is an effective way to recover otherwise lost value material.

The emulsified CRUD solution has three principal constituents: aqueous, organic, and fine solids.  Each of those constituents has distinct density values.  Following intense agitation to break a percentage of the entrained emulsion, a steady-state could stratify into individual layers over time.  These properties make CRUD a perfect candidate for three-phase centrifugation—the recovery process employed by many operators large and small worldwide.

A centrifuge accelerates gravity on materials passing through its bowl, a robust walled cylindrical chamber, spinning at an amazingly high rotational speed.  Accelerated gravity allows time-dependent reactions to occur up to three or four thousand times faster than in a static state.

A Flottweg Tricanter® was developed to separate an incoming liquid into three distinctive phases of varying densities.A solid fraction and two distinct liquid phases of differing densities. Each of these phases has a unique exit path out of the machine. The filled area within a centrifuge from the fluid inlet to the bowl wall is the pond, a rotating circular volume of fluid forcing against the outside wall. The rotational force pushes the heaviest materials, the solids, to the spinning bowl’s inner wall. An integrated internal auger moves at a slightly different speed relative to the rotating bowl and moves the accumulated solids toward one end where they are expelled. The liquids travel to the opposite end of the bowl, where the heaviest liquid (aqueous) phase collects close to the outer wall, and the lighter liquid (organic) phase accumulates near the bowl’s center. The light liquid flows from the machine across a baffle plate by gravity. The heavy liquid is discharged under pressure via an adjustable impeller. The impeller allows precise adjustment of the heavy liquid phase pond depth during operation and results in fast, accurate adaptation to changing feed conditions–without interrupting operation.

When processing CRUD for organic recovery, inherent features of the Tricanter® ensure successful recovery without further processing steps or additional separation stages.  And with a multitude of control adjustments available, the separation process can be adapted at any time, in real-time, to changing conditions.

Extracting CRUD from SX plants does not usually pose a significant problem; however, CRUD typically has more than 50% organic content. If not effectively recovered, those losses of organic within the CRUD can cost plants from thousands to hundreds of thousands to millions of dollars over a mine life cycle. A Flottweg Tricanter® accomplishes that recovery effectively.

For more information, visit www.flottweg.com
or email us at sales@flottweg.net