DENVER, CO – MARCH 2021 – SRK Consulting opened its first office in North America just four years after the company’s 1974 founding in Johannesburg. Now employing over 350 staff in 11 permanent offices, SRK North America (NA) works globally and collaboratively with clients and other practices throughout SRK. Effective today, the company announces Dr. James Siddorn as the new NA board chair and Terry Braun the new NA president. After 24 years with SRK NA as president and over 40 with the global SRK group, Andrew Barrett steps down, but will continue his tenure with SRK through project work and internal advisory roles. 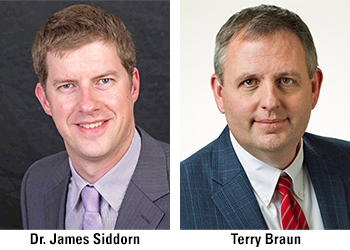 James has 25 years of experience in structural geology, 17 of which have been with SRK. He focuses on predicting the distribution of mineralization in base and precious metal deposits or providing inputs to geotechnical/hydrogeological studies. He also assists clients with technical reviews or operational support for exploration and mining projects worldwide. A respected authority in his field, James has taught more than 50 applied structural geology courses to over 1,500 geologists and engineers. In 2013, he was awarded the Past Presidents Memorial Medal by the Canadian Institute of Mining, Metallurgy and Petroleum in recognition of his efforts to teach and inspire young members of the mining industry. From 2014 to 2017, James was a PDAC director and from 2015 to 2019 chaired the PDAC convention planning committee. He became vice president for SRK Canada in 2013 and president in 2014.

“I’m honored to now take over as board chair of SRK NA,” said James, “as we continue to drive innovation in the mining industry by leveraging our experience with evolving techniques and technology and providing applied solutions for clients. It remains our vision to be recognized by these clients as a partner of choice, delivering services based on real needs.”

James replaces Stephen Day, who had been NA board chair since 2017. Stephen will continue in his role of corporate consultant for SRK in the field of geochemistry.

Terry has three decades of experience working on mining and environmental projects, including over 25 years with SRK. He leads multi-disciplinary project teams tasked with producing internal due diligence reviews on behalf of clients and engineering studies in accordance with public disclosure requirements in Canada and the US. His areas of specialization include evaluating base metal and industrial mineral commodities as well as mine closure planning, design, and financial provisioning. He is also an adjunct lecturer at the Colorado School of Mines. Terry became vice president for SRK US in 2008 and president in 2012.

"I am excited to assume this new role and to support our North American practice,” said Terry. “We have a diverse roster of technical specialists and we have fantastic clients. Beyond our active project portfolio, I look forward to working with our technical teams and partners on strategic initiatives, including responsible tailings management and the rising field of ESG disclosure in the mining industry.”

James and Terry extend their gratitude to Steve and Andy for their individual contributions and for how they positioned SRK for continued success.

Click here to read the full press release on srk.com

SRK Consulting is an independent, international consulting practice that provides focused advice and solutions to clients, mainly in the earth and water resource industries. For mining projects, SRK offers services from exploration to mine closure, including feasibility studies, due diligence reviews, and production optimization.

Established in 1974, SRK now employs more than 1,400 professionals internationally in over 45 offices on 6 continents. Please see www.srk.com for more information. 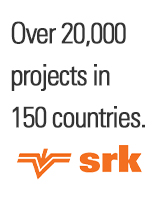